In my last post, I showed you how you could use dictation in Google Docs to transcribe your blog posts. However, I wasn’t satisfied with Google Docs despite the accuracy and speed of the transcription. I’m not a big user of Google apps, except for the occasional spreadsheet or document. Learn how you can produce more content in less time with some of Apple's hidden features.

As a hardcore Apple user, I decided to go back into the Apple ecosystem to hunt for a more satisfactory solution. I was aware of some of Apple’s voice capabilities, but not much beyond using it to create short text messages. I quickly found Apple’s extended dictation capabilities in OSX and began my research.

So what was I hunting? I wanted to dictate directly into my blogging app of choice, Byword and skip Google Docs as the middleman. I wanted to have more punctuation commands at my disposal. I also wanted a few more editing options thrown in for good measure.

Well, I discovered that OSX could meet all my needs and more. Not only could I create draft blog posts in Byword, but I could use all kinds of voice commands to open, switch and control apps, start and stop dictation, and much more.

While I’m not an expert by any means, there are a lot of conveniences to be discovered in OSX’s extended dictation commands. And, when combined with the workflow capability of the Automator app native in OSX, there is much more potential for increased productivity to be unlocked. But, that is beyond the scope of this article. 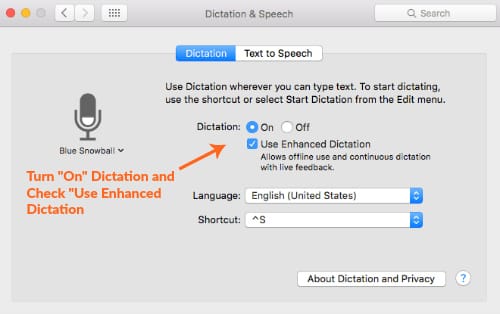 Turn on dictation and check the Use Enhanced Dictation box. This action begins a 1.2 gig download, which allows you to use Enhanced dictation commands both online and off.

Second, follow this link to discover and acquaint yourself with the basic dictation and systems commands available to you.

Next, return to System Preferences/Accessibility. In the new window scroll down to and select Dictation. To see the listed of extended commands click on the Dictation Commands button.

While you’re there, check the Enable Advanced Commands in the lower left corner of the window. This action unlocks accessibility to System Commands. Click Done when you’re ready. 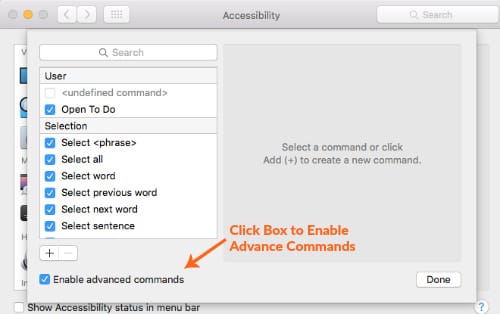 Finally, if you want to FEEL the power and truly engage with you computer, check the Enable the Dictation Keyword Phrase (as shown in the second figure). The default is set to “Computer,” but you can use any phrase you want. A microphone icon will display in your Menu Bar indicating voice dictation and commands are available to you. That’s it!

It’s time for a test run. If you’ve done everything correctly you should be able to say, “Computer, Open Mail”, and your mail app will open.

If you are like me, there’s something empowering about controlling your Mac without touching the keyboard. If you’ve ever felt that you were a slave to your computer, you are now in command of your digital domain.

You are now ready to explore all the possibilities and potential open to you. Just open up your favorite text editor. In the Edit Menu, click on Start Dictation or, simply say “Start Dictation,” if you enabled Advanced Commands. You’re ready to dictate.

I love having a personal stenographer and virtual assistant. I now dictate articles with little more than my voice and a mouse and I can push the keyboard aside when I “write.” That way I resist the temptation of editing while dictating a post.

If I want to insert new text, I just place the cursor with my mouse and dictate.

Beyond the Desk – Apple Dictation in iOS

As I said in my opening, I also wanted to be able to use the dictation across all of my Apple devices, including iPad and iPhone. Since I use Byword on both of those devices as well, dictation works well as I move from device to device.

Dictation isn’t as robust in iOS as it is in OSX, but it has all the power I need. One downside with IOS, it only allows for 40 seconds bursts of the dictation at a time, but it is more than enough to get in 2 or 3 sentences.

Dragon Dictation by Nuance overcomes this issue by allowing for unlimited continuous dictation. Dragon Dictation is a free app in the iOS App Store.
While I can’t dictate directly into Byword, Dragon Dictation makes it easy to move your transcription with a one-touch feature to copy all of your text into the app of your choice. If you’re doing short updates, you can even send your copy directly to Facebook or Twitter.

Dragon Dictation does have one stumbling block. The text doesn’t appear on the screen while you dictate, only after you stop recording. That spoils the continuous recording feature somewhat, but, as with iOS dictation, you are likely to pause every two or three sentences to gather your thoughts. So, stopping and restarting the recording may not be that big of a concern to you.

Admittedly dictation takes a bit of practice. For one thing, you need to acquaint yourself with the punctuation syntax. While it’s not critical, it’s important to remember that any punctuation you want to your text must be spoken. For example, you must distinctly pronounce commas, exclamation points, and other punctuation. Once you get accustomed to that, you can draft a blog post quickly. Better yet, skip the punctuation and add it during the editing process. You ready need nothing beyond “period”, “comma” and “new paragraph” while you are dictating.

My Apple Dictation Set Up

As for equipment, you can use either the built-in mic on your computer or you can add an external microphone. I prefer a good quality mic, so I use an external USB microphone, the Blue Snowball. It’s the mic I use for recording screencasts and other audio products, and it works well with dictation. But, any good quality USB microphone would be more than adequate if you are only going to use it for dictation.

For the iPhone and iPad, I use an external microphone as well. An external mic is less cumbersome since you won’t need to hold the device close to your mouth while speaking. That’s not a big issue for an iPhone; however, it makes recording on an iPad more bothersome – use an external mic.

I use the Audio-Technica ATR-3350IS. It’s an inexpensive lavalier (lapel) microphone. It’s easy to use and has excellent recording quality. The mic by itself isn’t compatible with the iPhone/iPad and must be used with the included adapter. I won’t go into the technical reasons, but this inexpensive splitter solves the compatibility problem, and you'll be ready to record. If you want to know more about the technical compatibility issue, you can check out this video. P.S. – The ATR-3350IS makes good, inexpensive solution for a Mac as well.

The Bottomline with Apple Dictation

If you want to improve your blogging output and productivity, give Apple Dictation a try. It doesn’t cost anything using the built-in microphones on your Apple devices. With a little practice, I think you’ll see a dramatic improvement in the time it takes to compose a blog post.

It’s amazing how much less time it takes when you aren’t trying to edit a post as you write it! Once you are comfortable talking to yourself, you may want to invest in an external mic for more recording flexibility. For now, Happy Blogging!

Did you enjoy what you just read? Was it valuable to your blogging efforts? Great, then get more in your inbox every week.

More Wordpress, more learning, more productivity tips, and more strategies. Continue to explore everything that Wordpress can do for you and your business.

Your Site
| Your Blog |
All Business

Make sure you, your website and your blog keep pace with the latest in design, blogging, social media, productivity and more.