Are you a writing “multi-tasker”? Do you fall into the trap of editing while you’re writing? It’s one of the biggest challenges most writers face. I know I suffer from it.

The most often cited words of advice in the world for writers is, “DON’T WRITE AND EDIT AT THE SAME TIME!

Yet, I still do it! And I'll show you how you can triple your blogging output right here.

If I’m not in a state of ‘flow’ when writing I will inevitably come to that dreaded pause. Or, even worse, a new thought pops into my head before I finish writing the last one.

If that new idea doesn’t come quickly enough, I’ll fall victim to the temptation to edit or polish the words already written. If it comes too soon, I immediately try to capture it only to lose the point of my last one.

I created this article using voice typing in Google Docs. I found it quick, efficient and virtually error free. In fact, the tools ignored the “umms and ahs” I said while speaking – I had to place them here manually for them to display.

I like the fact that I can pause while keeping the microphone active, take a moment to think about what it is I want to say next, yet without feeling the temptation to edit immediately. There’s something about not having your fingers on the keyboard that seems to help. I find the next words come to mind quicker, and I begin to move into a free flow of thoughts easily.

If ‘multi-tasking’ editing/writing is a weakness of yours, you might want to give this a try. My only recommendation – use a good quality mic or mic/headset, so the program is getting a crisp, clear voice. You’ll find that Google will transcribe the words as fast as you can say them.

I think this new tool shows a lot of promise, particularly when it comes to getting “words on paper” quickly. I plan on using it for at least the next three months to give it a thorough test. Of course, there are more robust commercial paid products available for the both the PC and Mac, the most prominent being Dragon Naturally Speaking. But, before you make a significant investment, particularly for the Mac version, give Google voice typing a try to see if it’s the right fit for you. The price is certainly right – it’s FREE.

Just go to the Tools menu in Google Docs. Click on “Voice typing”. And you’re good-to-go. 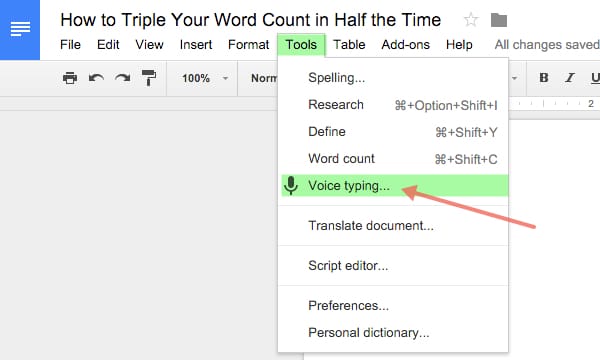 My word count for this post was little less than 600 words and I completed it in less than 7 minutes … before editing. Definitely more efficient.

Now, if they could only invent an app that could eliminate the editing process!

In my next post I’ll go into detail about some of the hidden features of voice dictation in Apple’s El Capitan operating system. Until then, blog on!

Did you enjoy what you just read? Was it valuable to your blogging efforts? Great, then get more in your inbox every week.

More Wordpress, more learning, more productivity tips, and more strategies. Continue to explore everything that Wordpress can do for you and your business.

Your Site
| Your Blog |
All Business

Make sure you, your website and your blog keep pace with the latest in design, blogging, social media, productivity and more.